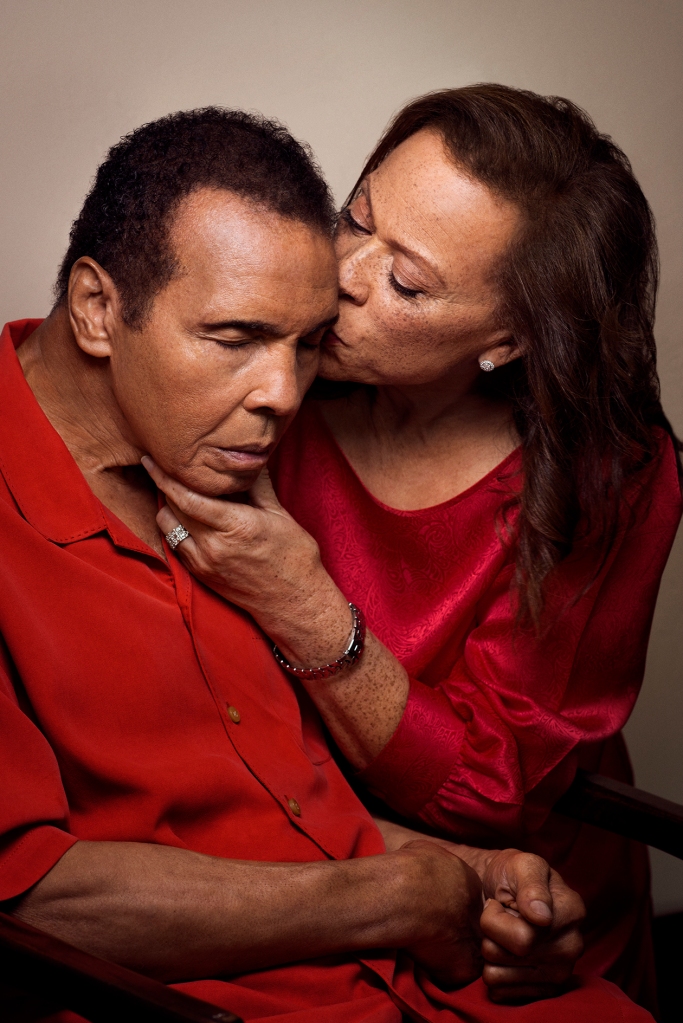 I first met Muhammad Ali when I worked for Oprah magazine over ten years ago. A section of the magazine called “Oprah Talks” would depict a day in the life of Oprah, and my job was to photograph her with various celebrities, from Billy Crystal and Madonna to the Williams sisters and “The Greatest” himself — Muhammad Ali. I’ll never forget the day my crew and I spent with him on his Kentucky farm, the extra time it took to set up because this American icon was playing magic tricks and having so much fun with us that we felt more like his friends than people hired to do a job. And that was the whole idea: he wanted us to feel at home, to be comfortable. We made  some wonderful photos that day.

Several years later, I got a call out of the blue from my agent. “Do you want to shoot a birthday party?” It was a surprising question; party shoots aren’t really what I do. Before I could say anything, my agent spoke up, “the party’s for Muhammad Ali’s 70th.”

The event was at a famous restaurant in Beverly Hills. Invitees were limited to Ali’s family, who flew in from all over the world, and one close friend, Howard Bingham, a photographer whose renowned documenting of Ali’s life goes back to then-Cassius Clay’s first days in the ring. There were no celebrities, no publicists, no media. And Bingham wasn’t there to take pictures. That was my job.

I had lots of ideas about how to create a celebratory look for the occasion. But when Ali arrived, I saw that Parkinson’s had taken a big toll since I’d least seen him. He walked slowly and with a cane. His family surrounded him, helped steady him, even held him up at times. His wife Lonnie, who I’d met on the Oprah shoot, was on his arm as a partner – but also as a caregiver now. Yes, the birthday party was a celebration of Ali’s incredible life and legendary accomplishments. But it was clear that the party was also about something simple and profound: this was a loving family coming together around its aging patriarch. Ali’s strength wasn’t in his arms and legs anymore, it was in the care and support he got from those closest to him. And it was in his spirit, in his eyes.

I’ve been thinking about aging and caregiving since I was a sixteen year old kid driving my grandmother to the outskirts of Philadelphia for dialysis. I remember being excited just to be driving, but she didn’t talk much, and at first I had no sense of what she was going through. My job was to drop her off outside this big dialysis center and pick her up later. I never went in. When I came back, I’d notice how tired she was and how she was even quieter than before. Those were our visits. It wasn’t an easy time for her. I grew to understand that.

A few years later, my grandfather had a stroke and went from running his auto repair shop in the heart of the West Philly hood to losing half his body functions. He went from lifting out car cylinder heads to learning how to pick up a coffee cup. He went from ordering around a work crew to learning how to speak again. And my mother went from being a full time insurance agent to becoming her father’s primary caregiver, to acting like a parent to this once-strong man who helped put two generations of kids through college. The strain on her was tremendous, and I couldn’t be there as often as I wanted to because I was in New York trying to launch a career of my own. The distance also kept me from fully documenting that period, a piece of my family’s history that represents so much love and so much challenge. Recently my agent called with a last minute job. “Can you fly in and out of Arizona for AARP Bulletin?” It was to do a story about caregiving with Lonnie Ali. Of course I said yes, knowing that this probably meant that I’d be seeing Muhammad Ali again and would be photographing them together. This also meant that I needed to do some homework on his condition and look into issues around Parkinson’s disease. There were several technical questions too: Would flash photography be allowed or would I need to use LED’s or hot lights? Will video be part of the shoot?

I did my research, got my answers and packed up my gear. My editor Michael Wichita flew in from Washington, DC and picked my crew and me up in Phoenix to drive us to the Ali residence. Lonnie and her sister, Marilyn, an integral helper in Muhammad Ali’s daily care, welcomed us and we went right in to surveying the location and setting up. I learned from Oprah to set up and shoot quickly, to try to get everything you need in less than ten minutes because that’s all you may have per talent schedules. I also was concerned that Muhammad Ali may not be able to participate for too long due to his condition. So I took a select series of images of Lonnie with her husband, this once-mighty figure now physically dependant on her. Their closeness, despite the progress of his Parkinson’s, came to life at moments the camera was able to capture. She kissed him on the forehead, and all the love, all the caring, just glowed. The shoot ended. Lonnie walked Muhammad Ali to a recliner in the corner of the room. I left them as I packed up but then noticed that they were looking at a photo album – one of several albums in that sitting area. I unpacked my camera and started photographing them, remembering a moment when I watched my mother going through an old photo album with her father. I could still picture her helping my grandfather run his fingers through the pages, taking that photographic journey through his life with him.

I moved closer to the Alis. I could see the pages of the album as she helped him leaf through it. There was the heavyweight champion of the world with the Beatles, with former presidents and politicians, with artists and athletes and movies stars. And there he was with kids in New York, with kids in Africa. There were pictures of him making speeches in front of all kinds of crowds in all kinds of places all over the world, a life on an unimaginably big stage. I’d seen many of these pictures in newspapers and magazines myself. I even felt like I’d shared some of these moments with him – that they were part of my own history. But the Alis kept turning the pages, and now there were pictures of him with family and friends, at birthdays and weddings and funerals. This was his collection of memories, some very public and some very private and personal. This is the magic of not only his life but of the way a life can be documented in a photograph and played out in an album.

We’re in a changing photography landscape. People now tend to gather around computers or iPads to look at photos. Their albums are stored digitally. While all this technology is great, there’s a special kind of magic in touching a book of photographs, in leafing through an album and hearing those pages turn, feeling the leather bindings, smelling the acetate.

Pagination is something that I take very seriously. And while I can put photos in a careful order on my digital devices, there’s something that only my hands know how to do that happens when they put prints in an actual album. Yes, there’s magic in that manual labor, just as there is in the tactile experience of handling a photo album while seeing real prints on a real page. They’re not backlit, there’s no LED effect, no gleaming twenty-first technology whatsoever – just hand-selected images catching the light. The experience is timeless and shared, just like it was for my mother reliving her father’s memories in a photo album with him. Just like it was for Lonnie and Muhammad Ali to touch the moments big and small, public and private, of his incredible journey. 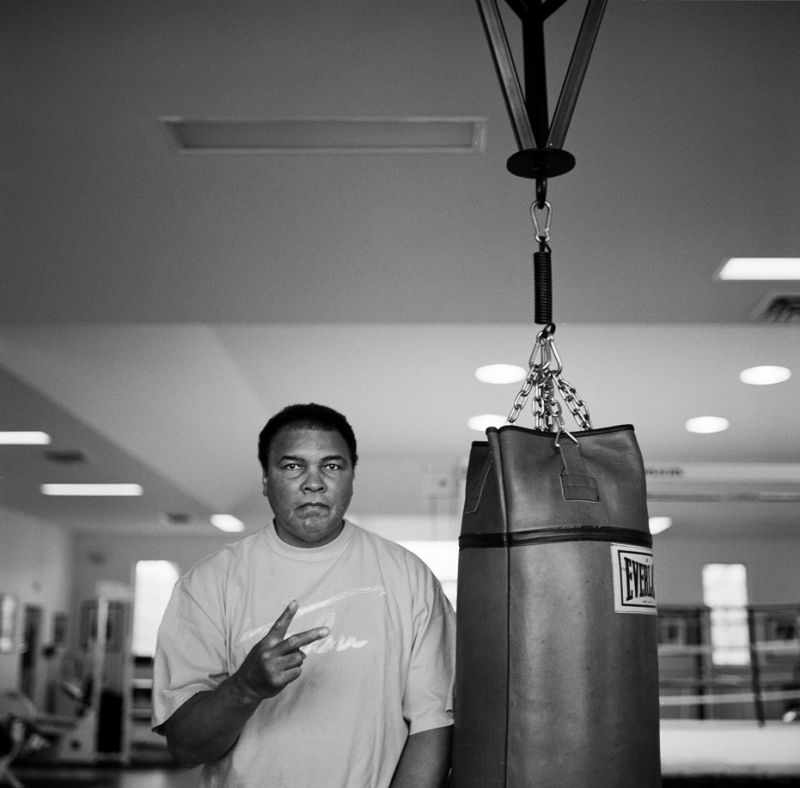 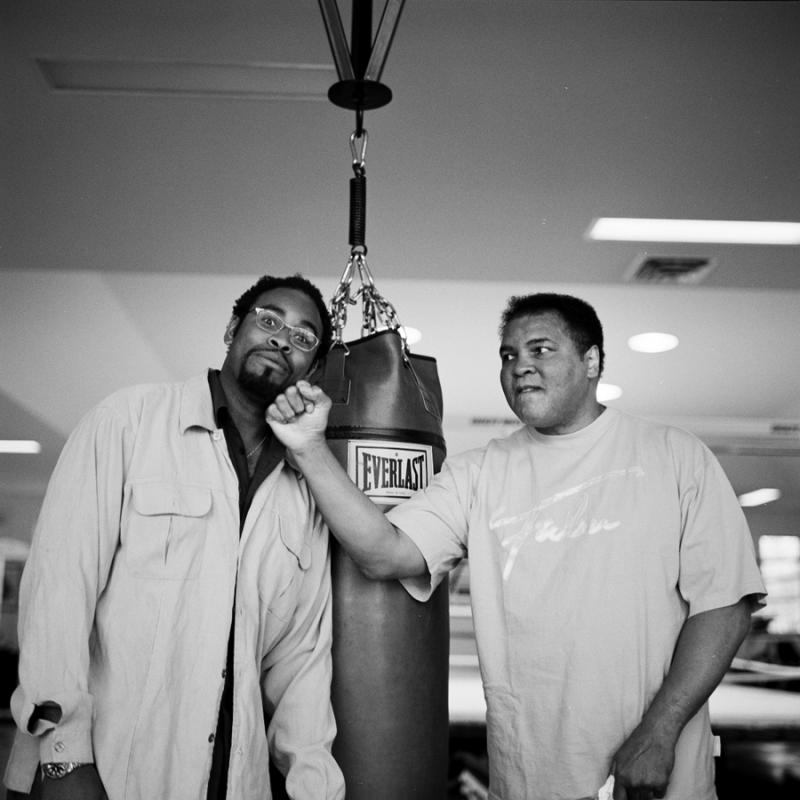 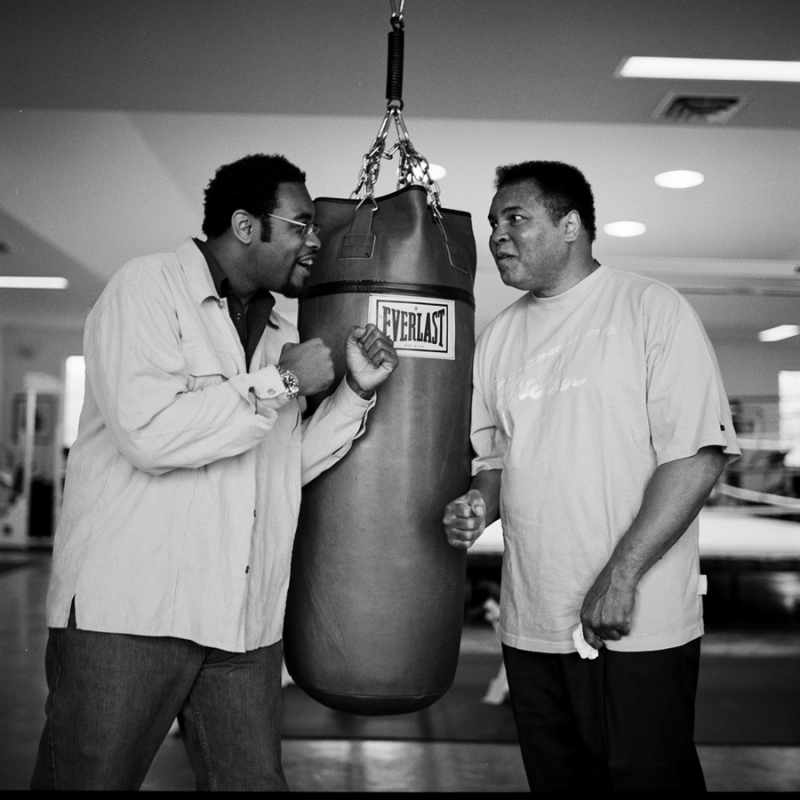